The Pontevedra Provincial Council together with the Portuguese INTERREG Administration called an international competition for the construction of a pedestrian bridge between the right bank Goián (Spain) and the left of the river Miño Vila Nova de Cerveira (Portugal). A park with the restored remains of an old fortress at the foot of a river beach is located in the Spanish abutment. These remains are from the 18th century.

On the Portuguese side, a natural park connects with the urban core of the town. This project enhances the brotherhood between both banks of the Miño, which share a privileged natural space dominated by the river and seasoned with a historical heritage embodied in the fortifications of both towns, thus generating the first cross-border urban park on the Iberian Peninsula “Ecoparque O Castelinho -Espazo Fortaleza”. The motto chosen for the competition was IRMANDANDE.

A suspended typology walkway is designed, which allows crossing the Miño without the need to locate intermediate piers in the river, thus safeguarding the channel from any constructive affection. The crossing over the Miño is made starting from the horizontal observation platform existing in the Espazo-Fortaleza park under the San Lorenzo fortress to the O Castelinho de V.N. from Cerveira, south of the Islet Do Castelinho. This crossing point has the great advantage of not affecting either the Goián river beach or the islet of the Do Castelinho park. Thus, any affection to this islet is saved, which due to the execution of the left abutment, it would be environmentally very affected and would occupy much of its small size.

The length of the structure is 250 meters between both abutments with a useful width of 4.00 meters and a depth of 80 cm. Two inclined pylons are designed, generating a central span of 190 meters and two lateral spans of 30 meters. The central span is suspended by two main cables that go beyond the pylons to later anchor in the ground. This double plane of cables makes its transit more pleasant and structurally collects the twists of the board.

In order to keep the side spans with the same strict depth of the main span, the pylons return below the deck, generating intermediate support that laterally embraces the structure and gives great expressiveness to these elements.

The following parameters have conditioned the choice of the suspension typology:

The abutment in the Espazo-Fortaleza park is located on the elevated observation platform of the existing river under the San Lorenzo fortress. The abutment respects and merges with the pre-existing performance with minimal affection, as if it had been thought of in a single project, taking advantage of the current ramps for accessibility to the walkway. 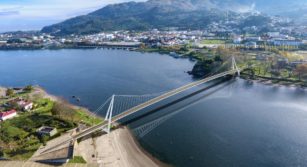 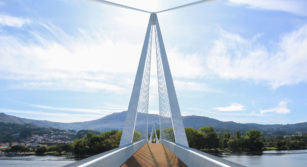 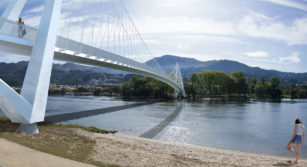 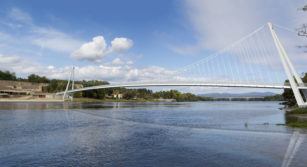 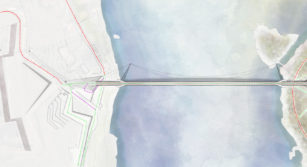 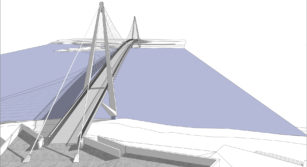 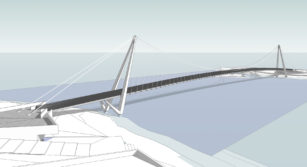 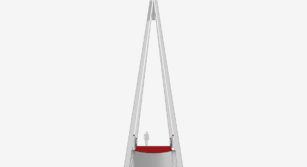 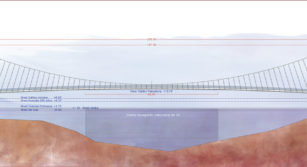 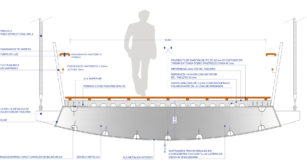 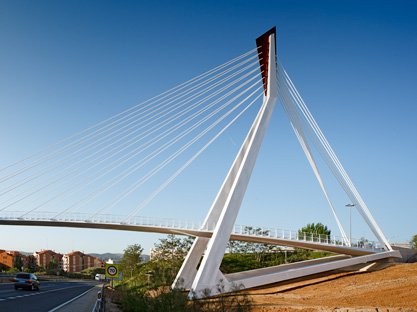 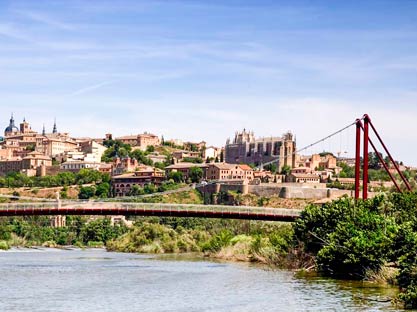