The project solves the extension of a pre-existing bridge in Toledo, in the Peraleda district, which gives access to a widening area of ​​the city, to the National Hospital for Paraplegics and the Peraleda Fairground. The bridge had only two lanes and a 1.00 m sidewalk on each side. The plan of action resolves the duplication to four lanes and a minimum sidewalk of 4.00 m on each side.

The design of the splitting of the Peraleda Bridge is carried out with the idea of ​​completely transforming the image of the current bridge, making it a landmark of reference for the Fairground in the modern area of ​​the city. This transformation must be perceived not only by the pedestrian or the driver when they cross the structure but also from various points in the city as a landmark of the Fairground.

An expansion of the current bridge for road traffic and a transformative expansion of the pedestrian complex are planned. Thus, for road traffic, an extension of 9.00 m of the deck is carried out with the same design criteria as the current bridge, and for pedestrian traffic, free-standing metal footbridges of 127 m span with inclined arches are attached to the sides, with the above ground level higher than traffic.

The interest of the structure lies in the footbridges on both flanks of the main bridge. Those radically transform the bridge image. These walkways have a width of 4.00 m each.

The side pedestrian bridges modify the whole image, segregating road and pedestrian traffic, placing them at different levels.

They are metallic painted in white with a span of 124 m without intermediate supports; with a bow-string titled bow typology; in this way, the horizontal component of the arches is transmitted to the deck or lintel, so that only vertical reactions are transmitted to the abutments.

The total width of the pedestrian bridge is 6.50 meters, its useful area being 4.00 m; It also separates 1.00 m from the bridge for road traffic; that´s why the beam bridges are very concealed between the footbridges that embrace them. The edge of the walkway is 3.00 m, so the precast beams inside the road bridge are not visible in the elevation. 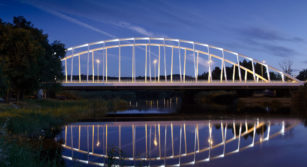 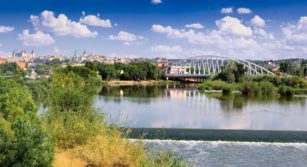 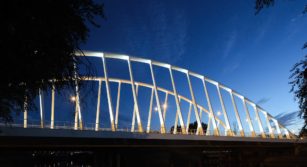 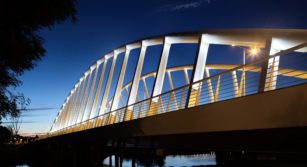 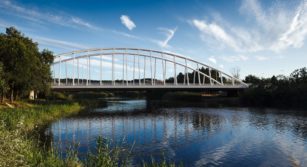 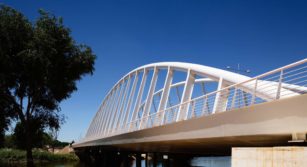 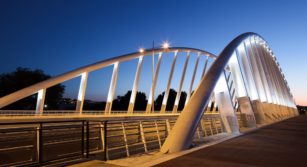 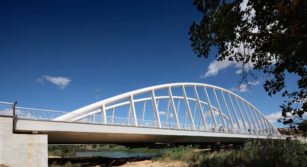 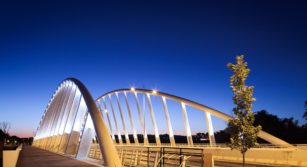 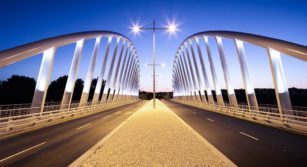 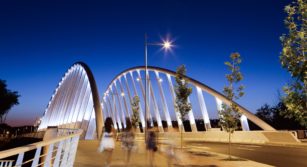 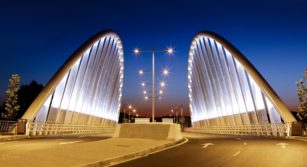 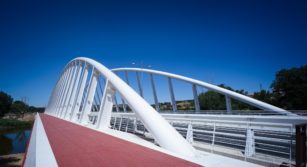 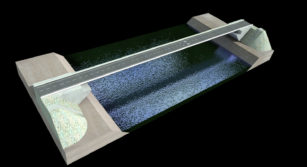 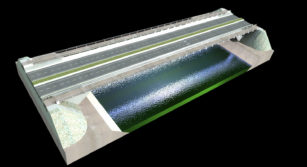 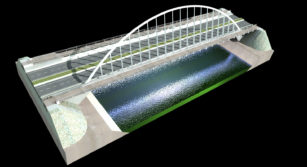 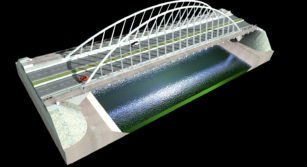 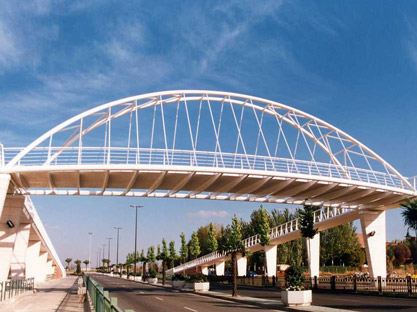 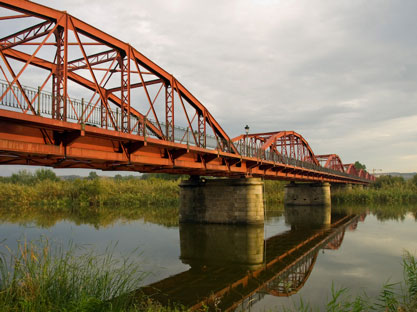